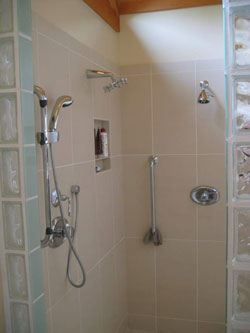 Experiencing a leaky shower? First thing that you need to do is determine where the leak originates from.

If the leak turns out to be caused by the shower drain or the shower pan, we are fully capable of handling either situation.

If you would rather not fix a leaky shower and have it remodeled instead, then you have come to the right place.

Huntsville Plumbing's team of licensed plumbers can handle the remodeling of your complete shower system. Maybe you want to change your shower head to an overhead rain shower system or perhaps you have been thinking about having multiple shower head nozzles installed.

If so, then contact us today and let us explain to you what we can do to make your desires a reality.

We offer Shower Services in Huntsville AL and Surrounding Areas